Anyone have any advice on great wedding blogs/ideas, or next steps to take?

I recently came across this article written by Madison Sonnier all about things to remember when you think you’re not good enough. I know I, as well as many others, often think that I’m not good enough in many situations.

This negative thinking pattern can have detrimental effects to your self-esteem and state of mind, and it is important to be healthy mentally. I think this article provides seven easy points that you can reflect on whenever you are feeling down about yourself.

In summary, the seven points are:

Madison goes into greater detail for each of the points; you can read the full article here

Life has moved pretty quickly the past 7 months. I changed a lot, and grown up a lot. I got to start over. Graduate school applications are done, and now I play the waiting game. With school officially over for the time being, I find myself with a lot more free time; I thought about how I missed blogging.

So here I am, a little more wiser, and a little more patched up. For the first time, in a very long time, I feel new; like a phoenix rising from the ashes; reborn. It’s rather refreshing. I’m with someone new. He’s rather refreshing — my bearded hard-working writer — he makes me happy. Love is such a funny thing; it never really works in the way you expect it to. It changes, it shapes, it’s versatile. I don’t regret everything I’ve been through in the past, since it’s what led me here, to this very moment; back on the blogging sphere, back to myself. I’ve missed you.

Sometimes music just captures exactly what you want to say. As you guys know from my previous post, I’ve been through a ton recently. I have a lot to say, but I just can’t say it without starting any negativity, so instead I created a playlist that has a list of songs that capture everything I feel. So, if you’re feeling like crap and going through a breakup, I’m sure some of these, if not all of these songs will be great to listen to.

Later I’ll post a more upbeat playlist to blast when you want to feel good about yourself and leave all that negativity from a breakup behind.

Here is The Saddest Playlist Ever; END_OF_DOCUMENT_TOKEN_TO_BE_REPLACED

Have you ever been in something you invested in for so long, that’s it’s utter heartbreak when it falls through? I have. Whether it be a job, school, or relationship. Mine was a 6 year long relationship, and I’ve learned a lot that I figure I can share, because if anyone understands heartbreak and life spitting in your face, that’s me. Someone can relate to this somehow.

The truth is no one tells you how hard it is when something you invested so much time in slips away. No one talks about a personal lurking darkness because it’s so stigmatized. I’ve honestly been through hell and back, and experienced darkness. My dark side was depression. I was clinically depressed for about two years in my second year of university, and sought out counselling help to learn how to cope with it. I’m over the hard bits now, but only because counselling helped me through that, and I applied the things I learned to help deal with my depression. There are traces still left over, and I’m not 100% better, but I know I will be.

Why was I depressed? My relationship with R hit a kink in the tracks that caused the train to derail a year and a half into our relationship. I lost my self-esteem, my sense of self, everything that I built. Nonetheless we repaired our relationship after some time and got back together. But I was never whole ever since that major speed bump occurred, and I’m still not. That incident kicked off more, but less intense incidents and setbacks, but we trucked through. Let me tell you what I learned;

1. It’s no use in mending a relationship when you’re not at your fullest potential, it’ll just cause more problems.

2. People make mistakes, and they can change (but only if they truly in their heart want to). Forgive and maybe spend sometime apart to regain what was lost, depending on how bad the situation is.

3. Relationships take hard work. Especially serious ones, it’s unrealistic to think that if it’s meant to be, it should just work. Get that idea out of your head

4. Problems are bound to occur, so it’s important to figure out ways that you can properly deal with them.

At the end of the day, a 6 year relationship isn’t something that was easy. There are many other couples who have been together longer, and I’m sure can share with you the mountain of problems they had to work out. R ended our relationship, but I don’t blame him for that. He obviously needs to figure out himself, and so do I, since we were never the same since the first big incident that caused us to walk on eggshells. Don’t get me wrong, perfect times were perfect, but I need to regain what I lost when I was depressed, and I haven’t yet. I’m still here, and that’s what’s important. I’m still sane enough to climb out of that bottomless pit called life, and climb out so that I’ll be on top. It’s a long way, but it’s worth it knowing that I can do it on my own. I’m not sure what’ll happen between R and I, but I know you can’t erase the love we have, and will always have for each other. And of course I’ll always be there for him, because I’m so stubborn and love him wholeheartedly.

But all I know is, right now I need to focus on me, and regain 100% all of the self that I lost. And that’s a damn good reason to stay sane and not give up.

I’ve been MIA for so long, that I’ve seen way too many movies and can’t review them all in depth, since that would take way too long. Instead I’ll gift you all with a list of all the movies I’ve seen and sum them up in a few words along with my ratings! Alright, here we go, in no particular order

Wolf of Wall Street (2013): Horrible Horrible Horrible. I’ll get beef for saying this, but it was Scorsese’s guide on how to be a successful asshole. Drugs. Sex. Money. Too much for my taste. 2/10

Spring Breakers (2012): Art. I appreciated what this film set out to do, and didn’t overdo it like Scorsese did. 7/10

Evil Dead (2013 remake): Eh. I was bored. Not as good as the original. I was so bored that I went to see Spring Breakers right after because I was so let down by Evil Dead. 4/10

Cannibal Holocaust (1980): Holy hell what did I even watch. Everything looked so real. Also a little bit ashamed I actually watched it 6/10

The Lego Movie (2014): So fast paced, I couldn’t really keep up. Reminded me of Robot Chicken, although that’s not necessarily a bad thing. 7/10

Would You Rather (2o12 – available on Netflix): Yay Brittany Snow in a horror movie! Entertaining, albeit predictable. Cool twist on the would you rather game. Would you rather stick a screw driver into your own leg or slice your eyeball with a razor blade? Yikes. 6/10

V/H/S 2 (2013): Horror anthology, better than the first I think. Each segment has a cool way of being filmed (from GoPros to laptop cameras), it’s innovative. Plus the Safe Haven segment will give you nightmares till the end of time. Just watch it for that one. 6.5/10

Triangle (2009): See Liam Hemsworth before he was famous. Confusing (but good confusing) with an ending that won’t let you down. 8/10 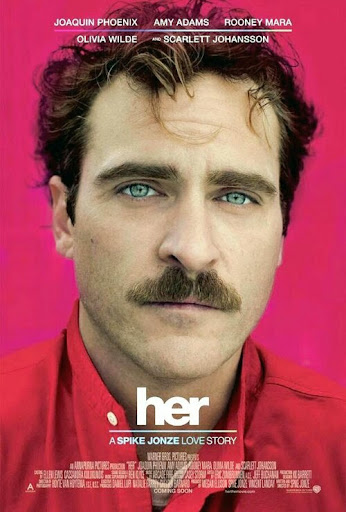 This movie was absolutely beautiful and brilliant. I’m quite familiar of Spike Jonze from his days on Jackass, so when I noticed that he wrote and directed the movie her, I was worried I wouldn’t take it seriously. Boy was I wrong; Spike Jonze impressed me on so many levels, and it’s clear that he has some serious writing chops.

I was so captivated by Joaquin Phoenix and his heartwarming portrayal of someone who is heartbroken but learns to fall in love again. Spike Jonze adds a modern twist to this love story by involving an advanced super computer (an OS system named Samantha; played by ScarJo) into the mix, and creates a love connection between these two characters. It sort of reminded me of Lars and the Real Girl (starring Ryan Gosling), where he falls in love with his sex doll. Both movies parallel each other in the sense of falling in love with objects, but her goes way more into depth of exploring Samantha’s personality and giving her humanistic life. ScarJo’s performance is sensational, and even though we don’t see her face, she breathes so much passion into Samantha with just her voice. You feel that Samantha is actually a real person, and the line between human and OS system  is blurred quite quickly in the movie.

The film was around two hours long, but held my attention the entire time with it’s talented writing and acting. If I had to choose one word to sum up my impression of this movie it would definitely have to be impressed. The film is so much more than someone falling in love with an OS system. It explores relationships and connections in a much deeper way, and the film does such a fantastic job at touching your heart.

Up Till 4
Blog at WordPress.com.